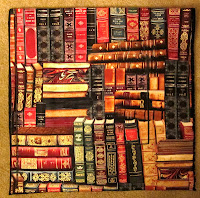 Quilters and other artists often buy materials that speak to them because some day they will be of use. Early this year, I was attracted to a book fabric and one of Impressionist paintings. Having no idea how I would ever use them, I bought a half yard of each.

I cut a door in the front of the journal quilt to reveal the paintings below. Click to enlarge to see the keyhole made of puff paint on middle right side on the front book panel You can open the "door" for a view of the Van Gogh.  Open the entire front cover to reveal more paintings. 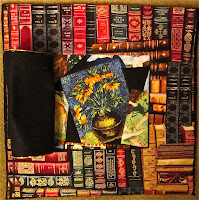 Last month I hosted my book club which had chosen to read Monument Men. It is about how Hitler's men went about pillaging the finest art in Europe and declaring other art "degenerate." The Monument Men had a mandate from FDR and the support of Eisenhower in a race against time to save some of the world's greatest art treasures from destruction at the hands of Nazi fanatics. Much of the art was hidden and some found in salt mines. I had not wanted to read the book, since I had already finished The Rape of Europa and seen the documentary of the same name. However, I was thrilled by all that I learned. Also, George Clooney, reportedly will make a movie of the book. 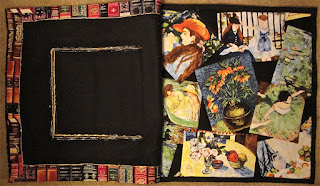