Portable crafts like bead crochet excite me. I always want a craft or a book in my purse. I just discovered another easily portable craft, Sashiko. It is "Zen" for sewers.
Sashiko is a form of Japanese needlework with a fascinating history, which evolved, I have read, from patching fisherman's clothes long ago. Today these decorative running stitches are seen mostly in quilting and embroidery, a white thread on an indigo or navy loosely woven hopsack. I bought some red thread, special long needles with an eye big enough to handle the floss, and a fabric with a pattern already applied. Google the many images you can see or design for yourself. Many have a history. 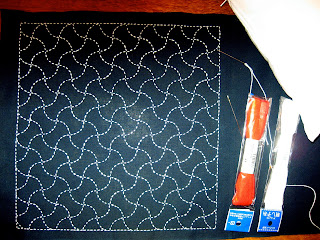 Fundo (counterweights) is a design developed during the Edo period drawn from the idea of market balance scales.  I bought my materials at the New England Quilt Museum. Then I picked up Mary Parker's book from the library to learn more of the history of the many patterns. My fabric had the pattern printed on it with enough backing for a pillow. I hope to put my hand on the sampler for coasters and stitch up this pillow. The Purl Bee has a tutorial.  I will definitely do more.
Note: In the Comment section you can subscribe by e-mail to be notified when a new blog is up (I think! :*)
Posted by Linda Hicks at 6:25:00 PM 6 comments:

Life with Snow Cones: a 4-in-1 journal quilt

When it rains it pours; and in Boston this year, when it snowed, it kept snowing! However, we kept moving and the roads were clear, though tight. Driving at night, one found landmarks obscured by snow cone after snow cone. These snow cones did make a great roof atop bushes for all those sparrows outside my door. 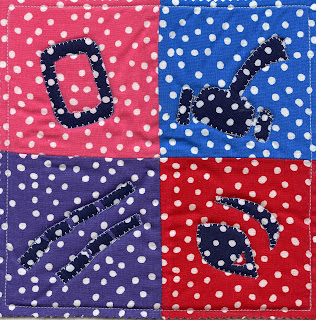 It seemed, as I have said before, we were all a little bit off-kilter. Our lives were a little off-center and there were probably more journal quilts I could have made on events, but I will summarize to these four:
1) I lost my iPad...thought it was at the mall after an Apple lesson;  but the next morn found it on the snowed-in passenger side of the car, 2) In the middle of all the snowfall, the trusty Toro snowblower died after 25 loyal years; but we found one of the last snowblowers in Boston at Home Depot by another name. 3) I had to have some skin surgery that "didn't get it all" and went back in for another cut and stitch. 4) Too much sun meant I need to have more surgery on the lower and upper lids of the right eye; and this was postponed, when I was ready to go, at the last minute. All a bit discombobulating :*)
Since a journal quilt captures a "significant" or memorable event in a week, you can see I have been negligent not to get these made faster. Another event yesterday was that after I dropped my iPad in a case in a padded purse at my One to One lesson at the Apple store, and it was dented, Apple replaced it. I love Apple. Let's loop that story in with the upper left iPad symbol,
Posted by Linda Hicks at 6:54:00 PM 6 comments:

On grandchildren's birthdays, I try to remember to make a soft, sewn birthday card. Erika was born on Valentine's Day. This morning I copied two photos onto printable fabric sheets; and I was thinking about the new goldfish she asked for and the present I sewed for Erika and her doll.  I cut the soft prints the same size and fused them with Wonder Under to different colors of fleece. Following some individual quilting around the edges and on appliques, I finally stitched the two fleece/photo pieces together, finishing with pinking scissors and then gold puff paint for the 5. These back-to-back images are on the soft fleece Erika loves.

At my website among the journal quilts I have two other fabric cards: Erika's 4th and Hannah's 6th. I hope tonight at the family celebration of her birthday, Erika will be amused to be featured as a mermaid. I should add some more gold paint around, but I got spooked the card would not dry in time for dinner tonight. I smeared it once trying to take a photo, but it cleaned up with water. However, one can always use a hair dryer with acrylic paints. 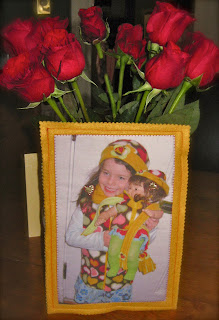 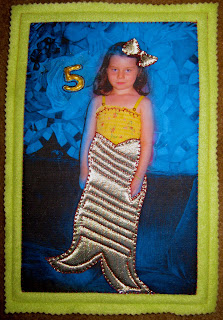 At beading the other day at my house, we remarked that the snow, which fell, and fell again, and then fell some more, was throwing people not "just a little bit off-kilter. We were making silly mistakes. Our alignment was skewed in performing.  Not important things, but we are a bit exhausted from it all, even if we aren't overwhelmed. I have gotten behind on journal quilts (apologies), but there is great pleasure in feeding those birds and sewing Valentines to distribute!
This is a lazy journal quilt and it took fewer that the usual two hours to create. I took a photo of the early snow on our house and printed it on an EQ Printables fabric sheet, let it dry for 15 minutes and then rinsed it, as instructed, for 10 minutes to get rid of excess ink. I put it on the radiator to dry, layered it with batting and a 10'' square of muslin for the back. After trimming the print, I fused it with Wonder Under to 10" square of a snowy calming light green. Next, I "quilted." I may use the tales of my being discombobulated by the snow in other journal quilts which I try to make once a week and need to double up on.

P.S. The fabric I printed on could be used for your grandchildren's faces on little stuffed dolls or other projects where you want a thread count so fine that texture is not apparent. You can make your own inkjet printable fabric as well. Just Google.
Posted by Linda Hicks at 7:17:00 AM 4 comments:

Email ThisBlogThis!Share to TwitterShare to FacebookShare to Pinterest
Labels: a journal quilt, EQ Printable, Wonder Under 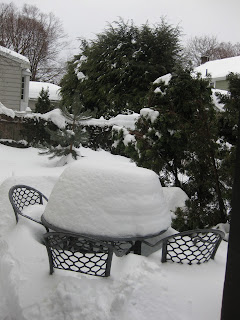 What a snow fall we have had. A good excuse to stay inside to craft. Look at the height of snow on our deck table!
A few days ago, granddaughter asked me to make something for her like the bird journal quilt (see January "Feed the Birds" post). So I took the dog she finished embroidering and the dog I worked along with her (see Archive "Going to the Dogs" post) and put them on a "falling snow" fabric similar to the birds' with the thought of preserving the art on a single pillow. I cut out two squares of fabric to fit a pillow form. With pinking shears, following the fold crease left by the embroidery hoops, I cut out the dog circles. Then I fused (with Wonder Under) the dogs to the red for Hannah's piece and the dark navy for mine. I worked so fast I didn't realize my dog was sewn in maroon. Anyway, I put the two right sides together and added another piece to my side so the pillow could slip in and out, sewed all around, no need for a zipper. After turning back out, I further secured the dog rounds with white floss to match the snow, but am trying to think of a little addition in words or color to suggest the good time we had in snowy January 2011, a label, or a free-motion stitched sentence for this one pillow preserving our two pieces together. Please leave suggestions.