Frankly, I have been having trouble getting back into painting. However, I wanted to take these two figures on a soccer field along with a newspaper picture of a soccer net writ large and combine. It seemed a simple task to sketch out the two 10-years-olds, move David's arm above his head, and throw on the paint. 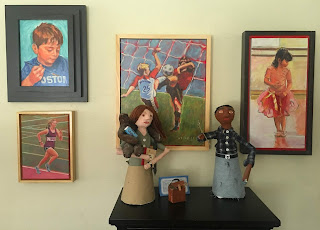 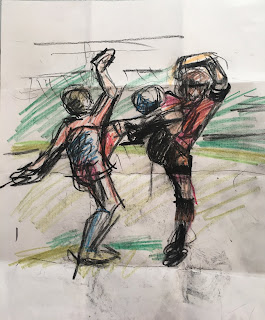 I scribbled out my plan w charcoal and squeezed out some acrylics on a paper palette (non-absorbent paper). With some water and a no. 6 round Princeton nylon brush, started moving paint energetically on an alizerin crimson pre-primed canvas. I cursorily sketched in the boys first and came up with the net and grass later. I used only one pointed brush, from point to side, throughout the effort. I used a fairly limited palette of white, off white, yellow, oj, red, two blues and a brown. Half-way through I told Joe a frame would help the composition so he made me one and I had two more sessions, the third after David told me to lower his arm rather than show his face. 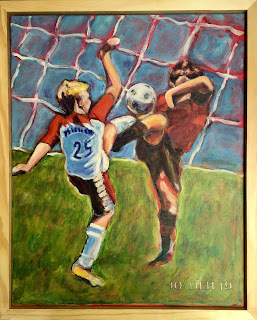 Feeling the grass needed something for that big green area, I thought I would connect w art history, I added bottom right, the age, name and date of the subject, using a stencil, black pointed Sharpie and some gold acrylic textile paint! I think the fact that David liked the painting and it is already up on the living room wall portrait corner will encourage me to paint more action. I also want to get back to Urban Sketching, cuz that is fast also!  (Click to enlarge)