Politics is in the air and hits the canvas

Spring starts March 20 and I have been too busy painting and listening to debates to notice. Today I went into the Chandler Gallery in Cambridge to see my Cacophony hanging (Feb.22, '16 post) Can't wait for the reception to hear Gerry Bergstein talk about this Small Works Salon 2016: Thesis/Antithesis.  Thirty-two pieces are in the show of this small gallery. The works fuse two contradictory ideas such as realism and fantasy, movement and stillness, or sincerity and irony. Bergstein says, "I have always thought that art deals not only with the question What is it?, but also with the question What ELSE is it?. The press release continues to say that the space that separates two opposites is filled with tension, humor and paradoxes. http://maudmorgan.com/gallery/smallworks2016_call.htm

Listening to the news, I painted The Pen and the Cash Dragon for a Truth to Power show. I wanted to submit earlier paintings, Anita and the Ships of Fools and Baptism at Mount Areopagus; but the Cambridge Art Association rule is that paintings must have been created in the last five years. Speaking to power, I say that is fine for photographers, but some paintings take a long time. Also, one may have paintings in storage that were ahead of their time and might be appropriate now. I went on to paint The Pen... in the few days I had in order to be a good sport. One can't win them all. Click to enlarge paintings.


In The Pen and the Cash Dragon, Raphael's St George and the Dragon meets the contemporary issue of cyberpen vs. wealthocracy. I appropriated the Renaissance artist's imagery to suggest the power of the pen (writing) and paint brush to replace the lance to skewer the evil of misused funds. In the painting are social media icons as brands on the horse, the smart phone, and Mail. Anita Hill as Statue of Liberty receives her award. Cyberjournalist Ariana Huffington leads a charge on the white horse to fight against overwhelming greed by pharmaceuticals (pictured in the cave), petroleum industry (torn icon) and finance, with the Supreme Court in the background lending no aid. I know you aren't supposed to explain your paintings...leave room for mystery and engagement of the audience. 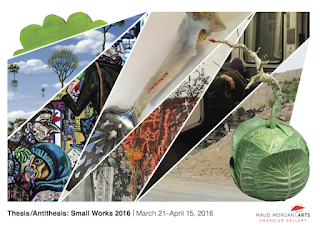 I look forward to starting the Across Cultures drawing/painting class at the MFA this spring. In the meantime, I am life drawing once a week for 3 hours; and my friend Paula and I have a project drawing/painting each other. Structure is good. Hoping to see Munch, the father of Expressionists, in NYC at Neue Gallery in the near future! Thanks for looking!
Posted by Linda Hicks at 6:24:00 PM