Last night we had our first snow of the season. Big flakes! The evening was magical with the cross country skiers, sledders and sculptors out in the dark. 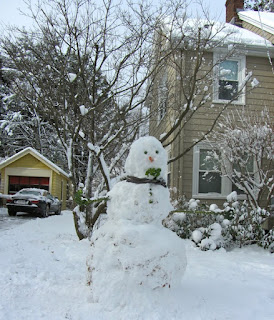 And what to my wandering eyes should appear, but neighbor Lloyd and his mother's rolling 3 foot snowballs from the top of the block down to their house. This was an engineering trick I had never thought of. Granted, #2 and #3 snowballs had to be whittled down to lift to make a snowman, but Lloyd and Sarah did it! A strand of brussel sprouts left over in their garden made eyes, nose and arms. 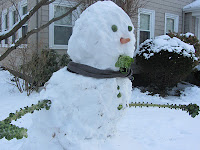 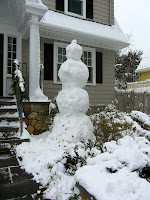 Next, Joe noticed that ten-year-old Katherine on the other side of our house had put up what her dad called "an abstract snowman." I am surrounded by art! 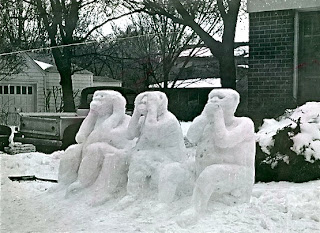 I keep close at hand this photo of  "Hear No Evil, See No Evil, Speak No Evil," the young efforts by myself and five friends in my front yard, teen years, long ago in Amarillo. I always hoped to duplicate it alongside Storrow Drive in Boston someday. I remember being told that Carl Sandburg said the only thing between Amarillo and the North Pole was a single strand of barbed wire. Note: Speak No Evil is having a tougher time of it! 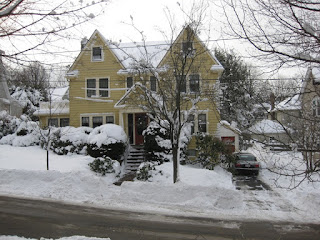 As of today, we have probably received more snow than we had all last year. This old photo pictures the amount of snow delivered. There has been double that in the past. You can click on the photos to enlarge.
Posted by Linda Hicks at 2:11:00 PM