Blog, Birds and a Birthday

July brought me a long distance lens, a part of my iPhone 12 Pro Max for my birthday. Robins built two serious bird nests just outside our back door, a large one for 3 fat fledglings and a different nest nearby, too small for 4 robins born later. Of course I had to both watch/see and snap photos of the action. Although I painted the robins, the photos were better!
The second robin family story is a sad one I am still trying to figure out. At first, this second nest was started in the upper half of the deck umbrella and that disappeared in the early stages. Not discouraged, the builder robin continued to create very near where the first nest had been, but not in the same spot and not so big. I worried it was half the size of the earlier one. But four eggs happened, because I saw 4 NESTlings. Later, I saw the first FLEDGling sitting below, trying to go further, prompted by mother robin's directions. She or he later worked hard to move the other two on as well . The mate had arrived days before and decisions were made. I am guessing that because one baby bird in the crowded nest must have died, possibly a broken neck, the others must be moved on for safety. After the nest was emptied and the family moved on, Joe cleaned out the area and we saw the dead nestling flat on the bottom of the nest. Very sad. I am certain that two of the fledglings did very well after their exit. I think I saw the two birds flying figure 8s near each other above our driveway. I hope a third who was the first out, did well also. 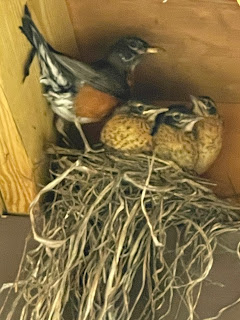 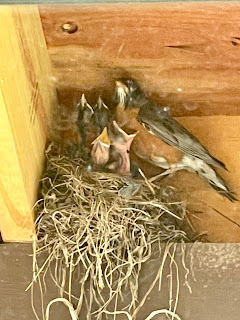 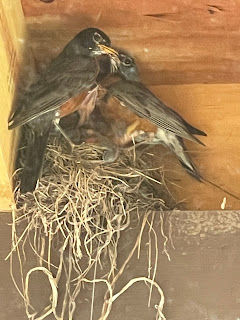 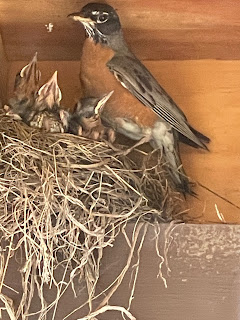 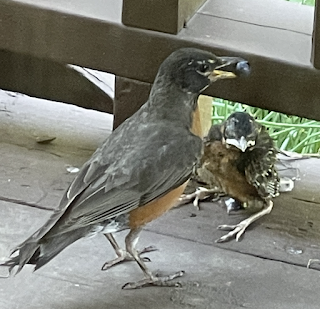 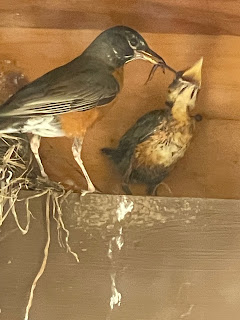 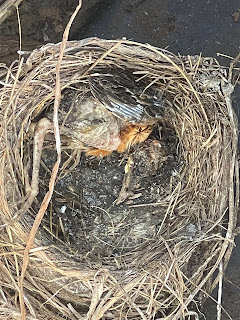