Because I was so fussy about my outfits as a young lady, I now do not have the nerve to buy my granddaughters a dress. But I do remember one outfit that was fun to wear! When I saw bolts of material at JoAnn's with elasticized tops that needed only ONE seam to turn it into a sundress...and on sale half price...I thought I would gamble! More than that, it was a stitching craft the children could complete in a short period with success. 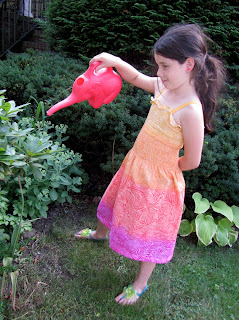 Earlier, I made a quick stop at the store to assess the children's taste, to gather their comments as to what colors and designs they like. I bought about 5" less than a yard after using my hands to suggest to the clerk the children's sizes. The lady cut through the elastic and then ripped the rest. "That is how these frocks-to-be should be cut. And by the way, leave a little larger-than-usual seam binding so that next year you can rip out the seam to enlarge to wear another year," she contributed.

At home, we measured the outfits, and cut some more. We pinned the sides; and I showed Hannah how to keep her seam straight, by eyeing a marking near the feed dogs. After fitting, we checked where she wanted the hem since she wanted a short rather than a long dress. What we cut off became straps. Then I showed her how to fold the hem twice, for a small hem with perfectly colored thread. She stitched the hem beautifully. I made wrap-the-neck straps she designed.

Erika sat in my lap to move the fabric to be sewn. She wanted straight straps over the shoulder and thankfully I had some yellow bias tapes to use. They know what they want! I measured and sewed her 2" hem. 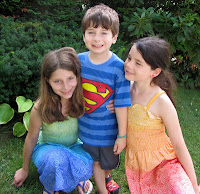 Hannah also had a black and white skirt that had a 2-inch-wide elastic black band. She would find a top for it at home. The girls wore the one or two hour sundresses home and to a cook-out that night. It is WARM in Boston! David did not want a dress. He wants a Batman shirt! I wonder if he would settle for a pillowcase?