Last Friday we drove to New York City; and highways were packed with cars, probably returnees from a long July 4th holiday. A car in front of us in the fast lane went out of control, moved across the other crowded lanes as all dodged it, into a guard rail, spun around and went a forceful head-first into the ditch. Debris was thrown onto my windshield. We phoned 911 and articulated the exact location. In the city I became more conscious of the zooming cars and less fearful of flying. 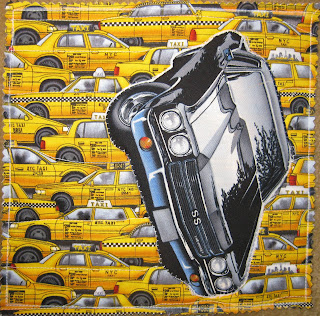 In the New York we swooned dining at La Bonne Soupe near MOMA; saw the Otto Dix show and ate Austrian goodies at the Neue Gallery close to the Metropolitan Museum; and viewed the Charles Burchfield watercolors at the Whitney. Of course, I did not miss The City Quilter on 24th. A drive back through New York State and western Massachusetts was much prettier and calmer.
Posted by Linda Hicks at 12:34:00 PM